DrillSim was originally published by Ambersoft, in Basingstoke UK in 1988 and sold internationally. It was well advertised regularly in World Oil, well received and was favourably reviewed in a book at the time,

Originally written in Borland Pascal, it needed an update and a GUI interface. My preferred target would be Java – but given the prospect of converting 10,000 lines of Pascal code to Java, I took the slightly easier option of converting to Object Pascal on Linux using Lazarus and Free Pascal. 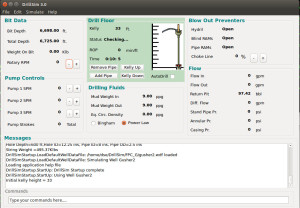